Meet Ruger, the toughest dog in the Hill Country!

Ruger is a 2yr old Hunt Terrier from Mason. True to his breed, Ruger earns his keep as a tracking dog for a large hunting operation. On October 16th, this gladiator of a dog killed a 5.5 foot long Rattlesnake! Unfortunately, Ruger took a bite from the snake before killing it. Thankfully, his owner witnessed the bite and got him to us ASAP!

On presentation to the clinic, Ruger had mild swelling under his jaw. However, as the case with snakebites, that swelling and tissue damage progressed quickly, and Ruger’s condition went from bad to worse very fast. At one point, the venom affected his circulatory system so greatly that he became unresponsive and extremely critical.

Ruger received 4 vials of antivenin, as well as a dose of hyperimmune plasma before improvement of his condition was seen. After a very uncertain 18 hours, Ruger began to steadily improve and capture the hearts of everyone that met him!

Ruger still has some pretty profound swelling, but began looking more like himself every day. Later this week, he will have surgery to remove the dead tissue around the bite area. The removal will be very extensive and he will have a long road ahead.

We are so impressed with Ruger and his tenacity. He’s not only one of the toughest dogs we’ve met, but also by far the sweetest! Words can’t describe how much joy it brought PVC to work on this little guy.

Despite his happy appearance and decreased swelling, Ruger was extremely pain under his jaw. A large pocket of fluid had accumulated in the area of the snakebite and a substantial amount of tissue had undergone necrosis.

Ruger’s inflammation and discomfort continued to increase. He was anesthetized and the bite wound debrided. A conservative approach was made during the first debridement, due to the fact that is esophagus and many other important structures were exposed. This would be the first of many debridements. 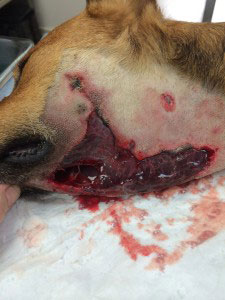 More dead tissue was removed to allow for improved healing and comfort. Throughout Ruger’s recovery, laser treatment was used to accelerate the process.

Ruger immediately became part of the PVC family. Here he is helping Dr. Carroll do records! 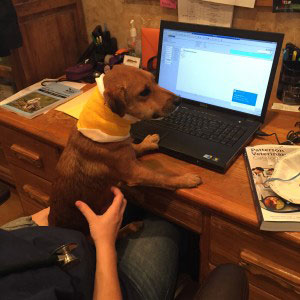 Bandaging Ruger’s neck with a traditional wrap prevented adequate circulation and lymphatic drainage. Instead, a “tie-over bandage” was used to hold dressings in place. Below you will see multiple sutures were placed around the wound to serve as an anchor for the tie-over bandage. A wet-to-dry dressing using hypertonic saline was extremely effective in assisting with mechanical and chemical debridement, as well as decreasing bacterial colonization. Medical grade honey was also utilized to promote granulation tissue and reduce bacteria. 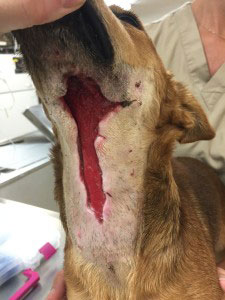 Ruger’s sutures were removed, and his wound left to heal by second intention. He was eager to get back home with to his family. Here he is with his cute turtleneck sweater, which prevented him from scratching the area. 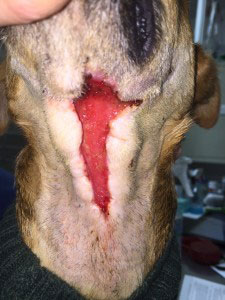 Ruger stopped by for a visit, and received lots of love from everyone at the clinic! His wound was healing remarkably. 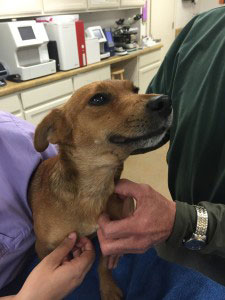 Getting scratches from the crew! 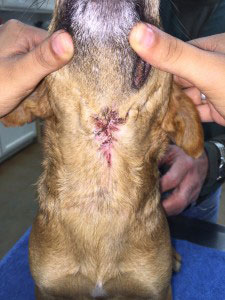 We are happy to report that Ruger is back to tracking and loving every minute of it! With the exception of a few scars, Ruger has had no permanent effects from his encounter with the Rattlesnake in October. Ruger’s owner’s Dalton and Leah were an intricate part of his recovery, and we can’t thank them enough for their patience throughout this long healing process.